Country: USA
Language: English
Distributor: Evil Angel
Director: John Stagliano
Cast: Kathleen Jentry, Trinity Loren, Fallon, Brandy Alexandre, Champagne, Nikki Nights, Jack Baker, Giovanni Menendez, Billy Dee
Description: Hot times- fun- sex- and lots of money- they’re everything a girl could want- except maybe peace of mind. Kat (Kathleen Gentry) is part of a gang of thieving lesbians. This is her choice. She feels it’s her only choice- if she is to get all she wants out of life- that is until she finds herself in a place where the choice is no longer hers- where all will certainly be lost. It’s pure fun at the start- with Kat and her voluptuous comrade- Dina (Trinity Loren)- teasing their way to wealth and sexual adventure. But soon things fall apart for Kat. She meets with the frustrating temptation of Nikki Knights- then the curious eye of private dick Stan Jensen (Billy Dee)- and his very private secretary Liz (Brandy Alexandre). Her lesbian girlfriends (Fallon- Champange- and Trinity) leave her no piece of mind. She is about to lose everything. It’s not until she encounters the wisdom of Al (Jack Baker)- then she has a chance. It’s not until she is reduced to her Bare Essence- then she can find the truth for herself. 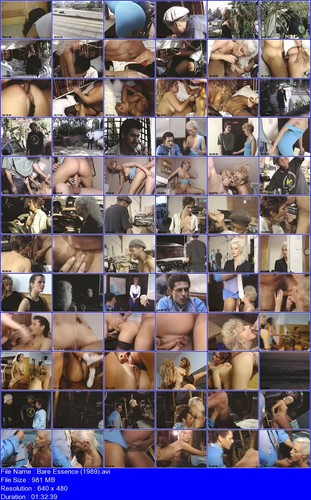