Country: USA
Director:Carlos Tobalina
Cast: Shauna Grant, Crystal Lake, Rosa Lee Kimball, Tamara Longley, Drea, Lynx Canon, Sparky Vacs, Jamie Gillis, Dan Mann, Joey Silvera, Don Fernando,Bill Margold, John Stagliano
Description:This wild and wacky sex comedy from 1983 stars Jamie Gillis as an incredibly wealthy old man who’s dying from some sort of terminal illness. Not one to go quietly into that good night, Jamie uses his money to buy himself some last-minute thrills. He wires up his home with video cameras, then tells his heirs that none of them will get any money when he dies. Unless, that is, they provide him with a first-rate sex scene that he can observe from the comfort of his hospital bed. Okay, so none of this seems very likely. It does provide a decent framework for the frolicking to follow, and that’s all that really matters, anyway. Highlights include an early scene with Shauna Grant as a naive young model who’s coerced into action by Dan Fisher in a high-octane outing. John Stagliano shows off his rough side when he interviews thick-set brunette Cathy Coffer for a secretarial position. John throws her on the bed and tears her clothes off as a prelude to their amorous encounter. Luscious Linda Rose Kimball shines in a feverish fourway with a trio of studs, while Joey Silvera brings in a pair of hard-charging hookers who he (after some side business) watches delve into a lesbian liaison. In the end, Joey hooks up with Tamara Longley in a frantic finale, but the ending only leaves the plot unresolved. Looks like you’ll just have to wait for the second edition to see who gets the cash! A fast-paced, fun-filled romp with some surprisingly rough edges.
File Name : Flesh And Laces 1 (1983).avi
File Size : 953.34 MB
Resolution : 640×480
Duration : 01:34:03
Video : xvid (xvid), 1 147 Kbps, 30.000 fps
Audio : MPEG Audio (MPEG-1 Audio layer 3), 256 Kbps (CBR), 48.0 KHz, 2 channels, 1 stream 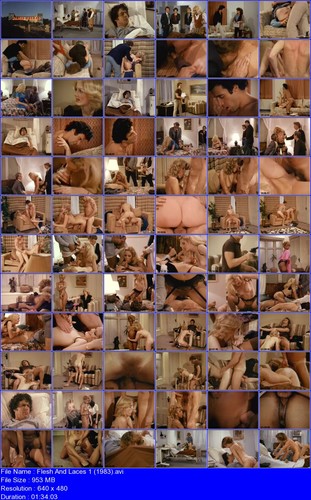