Country: USA
Language: English
Distributor: HIP Video
Director: Nic Cramer
Starring: Beatrice Valle, Jeanna Fine, Lynn LeMay, Patricia Kennedy, Shawnee Cates, Tabatha Cash, Dick Nasty, Joel Lawrence, Mark Davis, Ron Jeremy, Tim Lake
Description: He’s back & he’s hungrier than ever! Poor ole’ Guttman… He’s just got a divorce and now he’s off to Paris to get some well deserved rest. But you know how our intrepid hero is. Sex is on his mind. What will this infamous voyeur do next… besides lunch, how about some more “Le Amore”?
Rest easy, John Stagliano; any cleverness or imagination evidenced in this series’ first entry has vanished faster than Bill Clinton’s backbone. Now, all we get is a wall-to-waller featuring Ron Jeremy standing in one spot with a camcorder. No matter which way he turns, he spots somebody having sex. The camera can also apparently see through walls and change angles by itself. Still, the cast is good, and occasionally, so is the action. Tim Lake and an orally-inclined Patricia Kennedy start off nicely, followed by a disappointing trio of Beatrice Valle, Dick Nasty and Mark Davis. Lynn Lemay’s scene with Joel Lawrence isn’t helped by constant cuts back to Jeremy, and worn-looking Jeanna Fine’s lesbo session with Shawnee Cates is quite a disappointment. This is one series that needs a quick infusion of inspiration to keep it going. Market with the first entry for maximum customer interest.
File Name : Guttman’s Paris Vacation (1993).wmv
File Size : 1.13 GB
Resolution : 640 x 480
Duration : 01:16:19 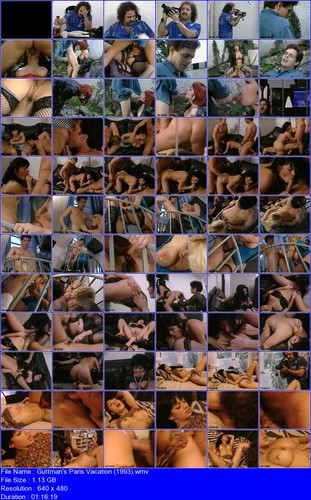