Country: USA
Language: English
Studio: Alpha Blue Archives
Starring: Jacqueline Lorians, Jacqueline Lorians, Anna Ventura
Description:
An absolutely stunning redhead who oozed innocent sexual curiosity, Jacqueline Lorians, was one of the loveliest porn actresses of the 1980’s. A gorgeous treat for the eyes with a devinely, slender figure, radiant fair skin and a pair of the most sensually inviting and mesmerizing eyes ever seen on film.
Jacqueline was a very compliant sexual performer, literally losing herself to her partners in every scene. Her soft, vulnerable sexuality made her the perfect choice to play frail, doomed lovers.
Jacqueline Lorians left the business in late 1988 but left behind some of the sexiest scenes ever produced. This superb collection contains early rare loops produced by Lusty Ladies, Limited Edition & others. Titles include: School Girls, Rich Bitch, Old Fashioned Girls, Patient Penny, Bound to Please and much more
Scene One – Jacqueline lies in bed naked, and masturbates. This is a period film, set in Shakespearian times and the performers speak to each other in that era’s dialogue. A man walks into the room and they make out. She gives him head and he rolls her over and fucks her missionary style before getting her on her side and fucking her from that angle. She rides him reverse cowgirl and then he pulls out and fucks her tits until he spunks.
Scene Two – Jacqueline is in front of Buckingham Palace. She approaches one of the guards (Joey Silvera), he is forbidden to speak, and she takes his cock out and gives him head. They move into the guard box and make out while stock footage of the other guards performing their duties outside reminds us where we are supposed to be. She bends over in front of him and he fucks her from behind and then he lies back and she rides him reverse cowgirl style and rubs her clit. He puts it between her tits to finish her off with a pearl necklace.
Scene Three – This black and white private detective parody let’s Jacqueline tease the detective by standing on his desk and showing off her body. He sticks his head up her skirt and licks her pussy and then we cut to a couch where she uses a vibrator on herself as he watches. She gives him head and then rides him cowgirl style. He gets her on all fours and fucks her doggy style and then pulls out and shoots his load onto her ass cheeks
File Name : Jacqueline Lorians Collection (1982) .avi
File Size : 1004 MB
Resolution : 640 x 480
Duration : 01:58:39 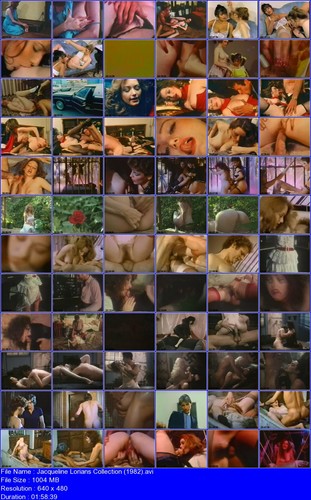