Country: France
Language: French
Director: Alain Payet as René Houaro
Starring: Cathy Stewart, Céline Gallone, Lucie Doll, Marilyn Jess, Monique Bruno, Morgane, Thierry de Brem, Dominique Aveline, Richard Allan, Jean-Louis Vattier, Carmelo Petix, Désiré Bastareaud, Michel Peruffo
Monique Bruno plays a blonde nymphomaniac married to straight-laced Thierry de Brem. She goes out at night dressed in a fur coat over nothing but stockings and seduces strange men. The only example we see is her having sex with Dominique Aveline on a train.
Next morning she spies on her maid (brunette) having sex in the kitchen with a curly-haired Jean-Louis Vattier. That night she goes out again in her fur coat and, it is implied , visits strip joints and the like.
It seems she has been spotted by someone with a Polaroid camera and a man visits her next day and blackmails her into various sexual encounters – sex with Richard Lemieuvre and a black girl; watching a fight between a brunette (probably Cathy Stewart) and a blonde, followed by a brief appearance by Desir Bastareaud, while sitting with Carmelo Petix who then gets a bj from one of the participants (the blonde); visiting a dinner party and turning it into an orgy by stripping off and masturbating in front of the guests (Dominique Aveline, Richard Lemieuvre, Morgane, Celine Gallone, Cathy Stewart and others).
Her husband arrives in the middle of this and is mobbed but refuses to join in and then we seem him alone in a room with a gun while his wife revels in the revels.
File Name : La nymphomane des sleepings (1979).avi
File Size : 919.33 MB
Resolution : 640×480
Duration : 01:14:19
Video : xvid (xvid), 1 396 Kbps, 30.000 fps
Audio : MPEG Audio (MPEG-1 Audio layer 3), 320 Kbps (CBR), 48.0 KHz, 2 channels, 1 stream 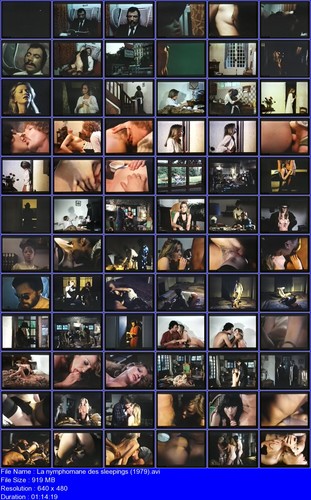