Country: USA
Language: English
Distributor: Arrow Productions
Director: Mort Shore
Starring: Ami Nitrate, Ann Marshall, Cathy Parker, Francine Baker, Linda Del Toro, Marc Brock, Robert Sargent, Guy Thomas, Harry Reems
Description: This movie is about people getting it on and having a good time on a boat called THE LOVE WITCH. It all feels very natural, and there is no privileging of male pleasure, nor is there an objectifying camera. The sex is shot from a neutral angle, and is mostly full-body. The text emphasizes sexual expression without making any judgments about women, and the sex scenes are interspersed with courtroom scenes in which Harry Reems (who has no sex scenes) pleads the case of sexual freedom, playing several characters against creative avant-garde painted backdrops. The plot is structured almost like Dante’s Inferno, in which Harry Reems takes the judge to the boat to witness these sins of mortals, and they debate as to the the moral or immoral character of the sex they are witnessing. In all cases, sex is seen as positive and fulfilling, and so the message to the audience is to release themselves from the shackles of morality and repression, and enjoy their bodies. A very 1970s take on sex, both refreshing and political.
File Name : Love Witch (1973).avi
File Size : 918.59 MB
Resolution : 640×480
Duration : 01:08:56
Video : xvid (xvid), 1 593 Kbps, 30.000 fps
Audio : MPEG Audio (MPEG-1 Audio layer 3), 256 Kbps (CBR), 48.0 KHz, 2 channels, 1 stream 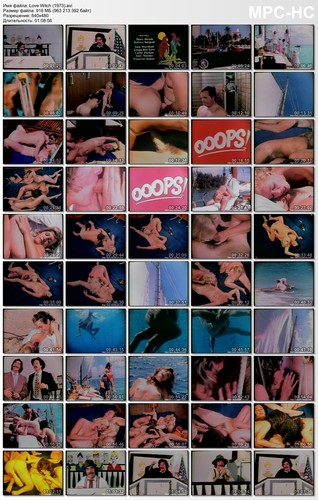