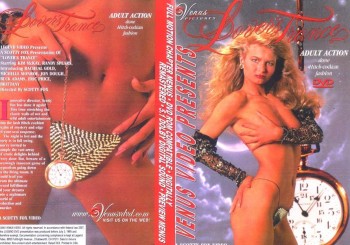 Country: USA
Language: English
Directed by: Scotty Fox
Studio: Legend Video
Starring: Brittany Michelle Monroe, Paula Price, Sunny McKay, Buck Adams, Eric Price, Jon Dough, Randy Spears, Randy West
Description: Innovative director Scotty Fox has done it again! This time stretching the elastic walls of wet and wild adult entertainment into the lush Hitchcockian realm of mystery and edge-of-the-seat suspense. The night is hot and the party is in full swing. You’re invited to sample the vast array of erotic delights behind every door. But, beware of a seemingly innocent game of hypnotism going down in the living room. It could lead you from the ultimate sexual fulfillment of your dreams into a nightmare world of seduction and murder.
This is Scotty Fox’ most ambitious project to date. The feature is a well written, fully developed tense thriller that is bound to give actor Randy Spears applause come awards time. Dark and at times genuinely tension-filled, this sexvid should get plenty of notice.
Jon Dough plays a rich guy who gets screwed on an insurance deal by his thieving agent, Spears. At a party that Dough throws, Spears in turn in screwed (in a more literal sense) by his date, Brittany, who is fooling around with Randy West in a bedroom. Later on at the party, it turns out that West is a hypnotist. He does a demonstration at the party by hypnotizing Buck Adams who turns out to be an axe-wielding lunatic. Adams pursues Spears, menacing him at his apartment and generally scaring the bejeezus out of him.
The sex is hot, but the real surprise in this feature is how involving the characters become. This is so unusual in an adult tape, that this factor alone is meritorious. Lover’s Trance is head and shoulders above most of its competition. It should be a big hit.
Scene Breakdowns:
Scene 1. Brittany, Randy West
Scene 2. Sunny McKay, Buck Adams
Scene 3. Brittany, Randy Spears
Scene 4. Michelle Monroe, Sunny McKay, Jon Dough
Scene 5. Paula Price, Eric Price
File Name : Lovers Trance (1990).avi
File Size : 735 MB
Resolution : 512 x 384
Duration : 00:51:55 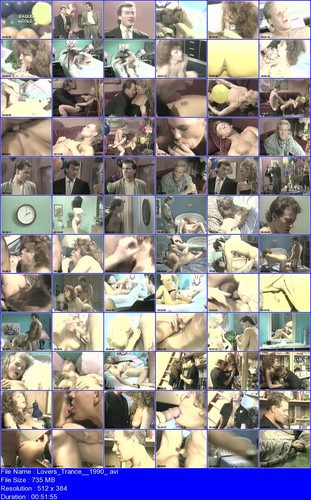