Country: USA
Language: English
Directed by: Robert Pudenda
Studio: VCA
Starring: Sharon Kane, Lysa Thatcher, Starr Wood, Leslie Laine, Jerry Bilt, Simona Wing, Michael Morrison, Herschel Savage, Jeffrey Coffin ,Cantara Christopher.
Description: From a time in a galaxy not too far away comes Dork, on an intergalactic mission of his planet, Neon.The Neonites have been detecting strange impulses from the surface of the planet Earth.When Drok zeros in on the source of one of these abnormal biological impulses, he is confronted by the humanoid, Cindy, and her ultra-sophisticated electronic dildo.Dork is perplexed by her indulgence with this electronic phallic replacement and reports back to Neon.Dork’s superiors are as confused as he is and instruct him to investigate this strange Earth custom.Dork and Cindy quickly become extremely interested in the differences of their cultures and Cindy gives Dork a crash course in Earthly sexual customs.
Always willing to help a horny alien, Cindy arranges for Dork to meet her friend Marge, a voluptuous California knockout in Marin County.Marge and her friends indulge Dork in terrestial pleasures starting with … Join Dork and Cindy and the rest of their crowd for the Sci-Fi sexcapade of the century full of oral sex and cosmic threesomes!
File Name : Playthings (1979).avi
File Size : 842 MB
Resolution : 512 x 384
Duration : 01:07:35 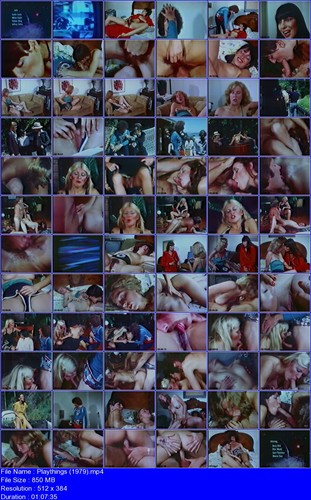