Country:USA
Language: English
Distributor: VCA
Director: Leon Gucci
Cast: Karen Summer, Desiree Lane, Don Fernando, Dan T. Mann, Francois, Jay Serling, Jimmy Star, Nick Niter, Rocky Balboa, Shone Taylor, Zebedy Colt.
Description: Personally I think Karen Summer really shines in this Taurus production feature, Karen was an immense talent who was made for the industry with tangible charisma, sexual know how, a wonderful attitude, a solid actress and she did translate that into her performances, this film is just one of many proofs, although this time, it’s all about Karen and no one else. It supposedly is an autobiographical picture of the real Karen Summer’s love and sex life from her high years to the present day but I took it with a grain of salt as I think most of the people watching will as it’s difficult to prove the legitimacy or differentiate from a lot of B grade dramas. She talks to the camera as if it were the fans getting the personal inside story as she states she is greatful to her fans and she owes them. Something unusual about, “Sizzling Summer” is that is a tragic tale with a dark edge which is not really resolved in the end, unusual that is for an american porn film of that year. Dorothy Onan is credited at the end but does not appear, Desiree Lane is credited but appears for literally a second in an outtake from, “Little Often Annie”.
Scene Breakdowns:
Scene 1. Karen Summer, Jimmy Star
Scene 2. Karen Summer, Nick Niter
Scene 3. Karen Summer, Rocky Balboa
Scene 4. Karen Summer, Jay Serling
Scene 5. Karen Summer, Dan T. Mann
Scene 6. Karen Summer, Shone Taylor
Scene 7. Karen Summer, Don Fernando, Francois, Nick Niter, Rocky Balboa
File Name : Sizzling Summer (1986) .avi
File Size : 591 MB
Resolution : 576 x 432
Duration : 01:15:43 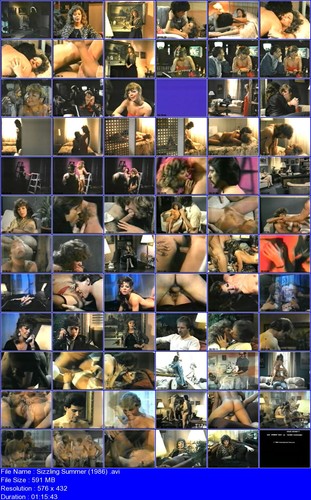