Country: USA
Language: English
Directed by: August West
Studio: Fat Dog
Cast : Chrissy Ann, Hanaku, Pearl, Summer Knight, Cal Jammer, Trixie Tyler, Tony Martino, Jake Steed
Description: Despite the clever and somewhat evocative title, this one has absolutely nothing to do with the acclaimed play and movie of a similar name. The filmmakers ran out of inspiration shortly after cooking up the title, so what we end up with within the flick itself is the rather familiar story of hooker Summer Knight. Summer wants to break free of her pimp and set up her own pay-for-play business with gal pal Trixie Tyler. Needless to say, complications ensue. Sexy complications. And while the story is played out, the sex is definitely not. Everyone here goes all out to please, resulting in a surprisingly effective little dose of erotic entertainment. We’re treated to a come-hither quartet of scene, starting with lovely young newcomer Hanaku. She joins Jake Steed in a slam-bang affair that gets the flick off to the right raucous start. Tasty Chrissy Ann is up next, hooking up with Tony Martino in a high-energy romp. Rarely seen strumpet Pearl struts her stuff in the next coupling, taking Cal Jammer on a rip-roaring ride. The finale finds Summer and Trixie celebrating their emancipation by indulging their taste for girl / girl groping. Their lesbian dust-up sends the flick off on a high note. As long as you do not come to this one expecting some sort of take-off on the original ‘Streetcar,’ you will not be disappointed by the sheer sexy sizzle.
File Name : Street Girl Named Desire (1992).avi
File Size : 1047.06 MB
Resolution : 640×480
Duration : 01:18:32
Video : xvid (xvid), 1 591 Kbps, 25.000 fps
Audio : MPEG Audio (MPEG-1 Audio layer 3), 256 Kbps (CBR), 48.0 KHz, 2 channels, 1 stream 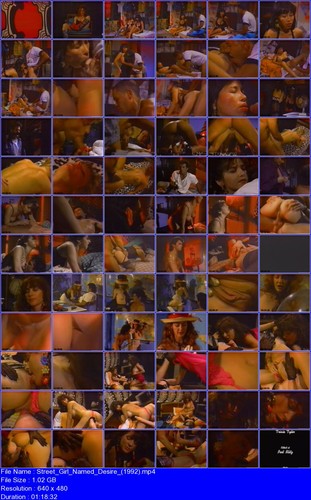