Country: USA
Language: English
Director: Richard Mailer
Cast: Alicia Noble, Jean Joseph, Robin Byrd, Rose Greer, Sandra Fay, Stacy Blue, Talia Smith, Aldo Ronson, Duke Devlin, J. Hyde
Description: This is the tale of a deteriorating old man that is confined to a wheelchair. His name is McPhearson, and his game is sex. He feels that he is dying and he wants to see his son one last time before his demise. He has no idea as to his son’s whereabouts, so he hires a private detective to locate him. Even though McPhearson is in a weakened physical condition, he has no problem achieving an erection and has a continuous flow of nurses and prostitutes catering to his whims. Our private investigator is wary of this case but takes it on anyway. The trail leads to a nightclub that features live sex acts. One of the female performers has the answers hes looking for. He seduces her, all the while pumping her for information. She finally lets loose with an incredible story that brings on the demise of McPhearson during his last sexual encounter. You must see the shocking end!
File Name : Last Sex Act (1975).avi
File Size : 908.61 MB
Resolution : 640×480
Duration : 00:55:17
Video : xvid (xvid), 1 965 Kbps, 25.000 fps
Audio : MPEG Audio (MPEG-1 Audio layer 3), 320 Kbps (CBR), 48.0 KHz, 2 channels, 1 stream 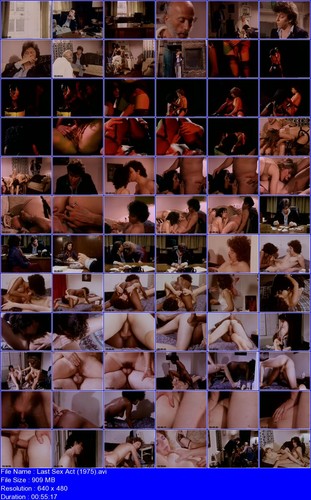