Country: USA
Language: English
Director: Charlie Diamond
Starring: Nikki Knight, Kristara Barrington, Misty Regan, Nicole West, Billy Dee, Dan T. Mann, Rick Savage.
Description: When Misty Regan’s parents go away for the weekend, she makes the most of her chance to have the house to herself. Misty decides to host a small bachelorette party for her soon-to-be-married gal pal Gina Rae. Along with her friend Kristara Barrington, Misty phones up a pair of male strippers and invites them over. Of course, once they show up, Misty and Kristara have just got to make sure that they live up to their billing. They treat the swarthy studs to some amorous oral loving as a prelude to their evening of eroticism. Postman Rick Savage gets in on the fun when he spies what’s going on inside the house. He promises not to tell Misty’s parents about what’s been happening — as long as he can get in on some steamy sensuality with Kristara, that is! Meanwhile, Misty’s youthfully delectable sister Nicole West has been sneaking around the house, ready and eager to prove that she’s not too young to play along! Eventually Gina herself shows up and finds herself in the clinch with one of the male strippers. Misty, Kristara and Nicole entertain the other stripper in a heated group grope while Gina experiences her final pre-marital bliss. Sure, there’s plenty of teasing going on — but there’s even more pleasing in this white-hot blast.
Scene Breakdowns
Scene 1. Kristara Barrington, Misty Regan
Scene 2. Kristara Barrington, Billy Dee / Dan T. Mann, Misty Regan
Scene 3. Dan T. Mann, Nicole West
Scene 4. Kristara Barrington, Rick Savage
Scene 5. Billy Dee, Nikki Knight
Scene 6. Kristara Barrington, Dan T. Mann, Nicole West, Misty Regan, Rick Savage
File Name : Tease Me (1985).avi
File Size : 957 MB
Resolution : 640 x 480
Duration : 01:13:47 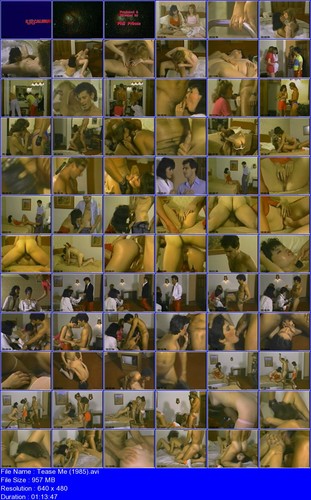