Country: USA
Language: English
Director: Marty Rensokoff
Cast: Sandra Stevens, Kim Wong, Cindy White, Becky Walker, and some guys
Description: From 1970 on, just about every TV cop show had one episode in which the heroes went after slimy West Coast porno peddlers. Britt Blazer is exactly that kind of plot, adjusted here for Double-Softie-style maximum skin.
An unredeemable thug – complete with porkpie hat and cigar – and his busty moll kidnap the nubile daughter of a politician, tie her down to a bed, strip her clothes off and film her being molested and raped by his henchmen. And if her father doesn’t cough up valuable “transcripts,” things will get even worse. Of course only a moron would let himself be photographed in a criminal act…but don’t annoy us with details. Off -camera, the boss man and his babe take turns helping themselves to her body.
Enter Special Operative Britt Blazer, sort of a Honey West in crotchless panties, (who resembles Peg Bundy). After blowing the (faceless) guy giving her the assignment, she then poses as a door-to-door saleslady and, in about two seconds, persuades the henchman to have sex with her, before belting him cold. She unties the politician’s daughter…but things don’t go exactly as planned …
Like cheese? You can’t do better than this piece of schmaltz.
File Name : Britt Blazer (1970).avi
File Size : 645 MB
Resolution : 640 x 480
Duration : 00:59:59 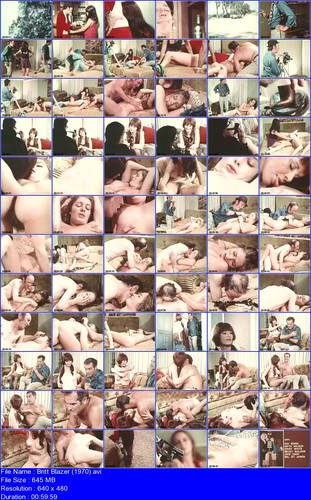