Country: USA
Language: English
Distributor: Acorn Films
Director: Richard Lerner
Cast: Sally Paradise,Jack Duquesne,Kit Fox,Simone Fallique,Shokan Hill,Pris Teen, Elmo Hassel,April Lace,Julie Love,Carol Orange,Mona Lott,Joy Ball,Marylou Wallenstein,Rita Stranworth
Description: The best porn movie I ever saw, or at least the movie I liked the best. I saw it at the 1972 Erotic Film Festival in New York.
The basic plot is, a girl receives a letter in the mail which has some news which makes her very happy, so she has sex with the first man she sees.
Later, she goes somewhere else and has sex with man number 2.
Next, man number 2 goes somewhere else and has sex with girl number two.
After that girl number 2 goes and has sex with man number 3.
This continues until finally girl number 5 has sex with man number one. This completes a circle and thus the title “hot circuit”. Every person in the movie has had sex with two different partners.
All of the girls are beautiful, all of the men good looking. Each sex scene has a realistic story behind it about how the couples met and have sex together. Lots of outdoor shots of driving around Los Angeles. This was a nice happy movie with no conflicts and lots of good sex in it. Everybody gets laid twice.
What is surprising is that it is not available in video. I found it on IMDB but I cannot find it anywhere else. Why does such a good and well produced movie disappear?
Sam Sloan
Scene 1. Sally Paradise, Jack Dusquesne
Scene 2. Joy Ball, Kit Fox, Jack Dusquesne
Scene 3. Kit Fox, Simone Fallique
Scene 4. Simone Fallique, Shokan Hill
Scene 5. Pris Teen, Shokan Hill
Scene 6. Pris Teen, Elmo Hassel
Scene 7. April Lace, Elmo Hassel
Scene 8. April Lace, Jack da Haven
Scene 9. Sally Paradise, Jack da Haven
File Name : Hot Circuit (1971)
File Size : 2.8 GB
Resolution : 640 x 480
Duration : 01:20:46 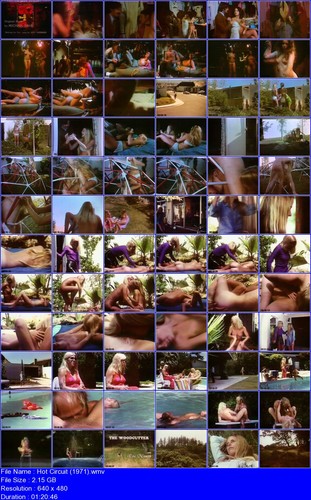