Country: USA
Language : English
Distributor: Factory Home Video
Director: Connie Barney
Starring: Alex Jordan, Cassidy, Heather Lere, Sunny McKay, Victoria Paris, Eric Starr, Rob Tyler, Ted Wilson, TT Boy.
Description: Assuming that the real director behind the above-mentioned nom de plume is the guy who is the off-camera voice that spurs this video, then this show, with a few reservations, is the best thing Bill Margold has done in a year or so. But if there really is a Connie Barney, my apologies. T.T. Boy plays Freddy, who lives in an apartment complex and who has a complex. He’s shy but horny. He likes next-door neighbor Victoria Paris, but she bluntly tells him he’s not her type. However, Freddy’s got a book on how to be macho. Sort of like “How to Succeed In Business” complete with narration. T.T. does get Victoria, but only in his dreams.
Meanwhile, everybody in the building except T.T. seems to be getting more than their share. Sunny McKay and Heather Lere enjoy a poolside twosome, followed by a seven-person group scene. Finally, Alex Jordon, in one of her first non-amateur roles, shows that she is Freddy’s type, at least when she gets some champagne pumped into her. My only reservation about this show is the colors. They are often too strong and bleed all over the place. People turn green without ever tasting my wife’s cooking, but the sex action is cooking and that counts for a lot. A recommended feature.
Scene Breakdowns
Scene 1. Victoria Paris, TT Boy
Scene 2. Heather Lere, Sunny McKay
Scene 3. Sunny McKay, Victoria Paris, Ted Wilson
Scene 4. Heather Lere, Rob Tyler
Scene 5. Cassidy, Eric Starr
Scene 6. Alex Jordan, TT Boy
File Name : Ready Freddy (1992).avi
File Size : 1.36 GB
Resolution : 640 x 480
Duration : 01:21:05 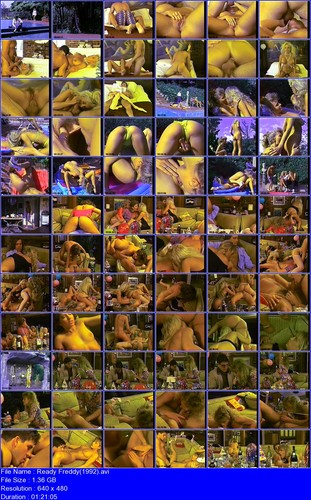