Country: France
Directed by: Gerard Loubeau
Studio: Alpha France
Starring: Brigitte Lahaie, Daniela Giordano, Jane Baker, Julia Perrin, Marie-Claude Moreau, XNK1905
Description: Luca arrives to spend a summer with his parents at their beachside villa. Also present are his sister, Fanny, his Aunt Martha and two maids. He arrives just as the two maids are about to go off on a double date on their afternoon off. In this version this is a hard-core scene as Brigitte Lahaie has sex on the bonnet of a car while her fellow maid (or actually the body double) has sex with Piotr Stanislas on the grass nearby.
Luca goes to bed early so that he can steal some of his aunt’s underwear which he then puts on. Fanny takes a copy of Super Sex magazine (a bit of Italian porn product placement) from under her mattress and masturbates herself to sleep. Luca is plagued by flashbacks of near sexual encounters with his aunt as a young boy.
In the morning the maids find his black stockings and decide to take him in hand – literally. They also do the same for Fanny. With this experience behind him, and some practice with his sister, Luca finally manages to consummate his feelings for his aunt.
File Name : Secretes d’adolescentes (1980).avi
File Size : 1.54 GB
Resolution : 640 x 480
Duration : 01:01:37 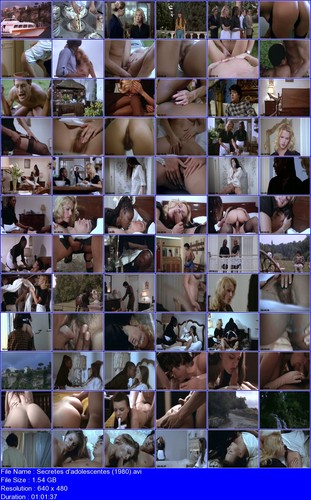