Country: USA
Language: English
Directed by: Charlie Diamond
Studio: Caballero / Vidco Entertainment
Starring: Blondie, Tony Montana, Trinity Loren, Brittany Stryker, Frank James, Dan T. Mann, Marilyn Michaels, Mary Moons, Lee Jay
Description: A Sensational Expose of the Oil-Soaked Hellcats of the Ring!
Thousands of young and beautiful women try to make it in the glitz capital of the world. A crafty scientist thinks he has the answer for his voluptuously sexy girlfriend. A serum that will turn her into a super-powerful champion in the lucrative and attention-getting world of Oil Wrestling. Before he has a chance to inject her with his miracle fluid, another female wrestler steals it for herself. But instead of developing the physical prowess to win over all contenders, the serum turns her into a voracious, non-stop sexual animal! Then comes the big night where the scientist’s girlfriend and the sex-crazed tigress clash for the championship. What a sight! Oil-soaked glistening bodies, tussling, clawing, pulling, biting, mauling, wrestling for the coveted prize. The crowd goes wild! Everybody’s UP, bug-eyed, watching these two buxom, beautiful babes battling it out. The winner? See for yourself in the most scorching, sizzling climax ever filmed.
File Name : Super Wrestling Sluts Of Hollywood (1986).avi
File Size : 1.37 GB
Resolution : 640 x 480
Duration : 01:24:45 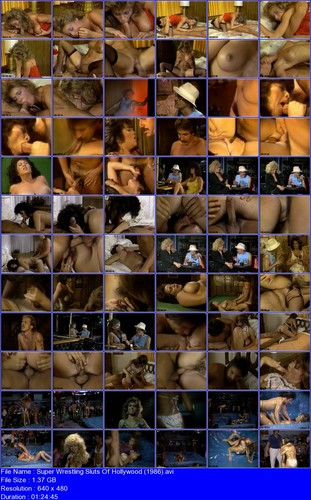