Country: USA
Language: English
Distributor: Legend Video
Director: Scotty Fox
Starring: Bridgette Monroe, Danielle Rodgers (as Danielle Rogers), Kristarah Knight (as Krisstarah Knight), Rayne, Blake West (as Chris Douglas), Jon Dough (as John Dough), Randy Spears.
Description: Stunning blonde sexstress Danielle Rogers turns in one of her best performances ever in this provocative tale of sex among the upper crust. She plays an extremely wealthy woman who is about to get married to the equally rich Jon Dough. So what could be the problem? Well, simply put, Danielle doesn’t like sex very much. She endures it, but has the stated attitude that 1C”women of her class don’t climax.” No sooner does she have a disappointing romp with Jon that she’s whisked away by her fairy godfather and taken to his palatial estate. Danielle is forced to work as her godfather’s maid, which starts to work on her snotty demeanor almost instantly. And once she catches sight of the estate’s studly young gardener (Cal Jammer), the stage is set for her to discover the sexual animal within. Cal helps bring out Danielle’s sexual side, in the process convincing her that there’s more to life than selfishness and greed. Danielle’s performance is top-notch, as she brings this self-absorbed character to life. She convincingly portrays the woman’s burgeoning sexuality, and her romp with Jammer is a slam-bang highlight of the video. Her down-to-earth nature emerges as she’s driven further and further over the edge
Scene Breakdowns
* Scene 1. Danielle Rodgers, Jon Dough
* Scene 2. Bridgette Monroe, Kristarah Knight
* Scene 3. Kristarah Knight, Jon Dough
* Scene 4. Rayne, Randy Spears
* Scene 5. Danielle Rodgers
File Name : Sweet Miss Fortune (1990).avi
File Size : 819.57 MB
Resolution : 720×480
Duration : 00:51:31
Video : xvid (xvid), 2 082 Kbps, 30.000 fps
Audio : MPEG Audio (MPEG-1 Audio layer 3), 128 Kbps (CBR), 48.0 KHz, 2 channels, 1 stream 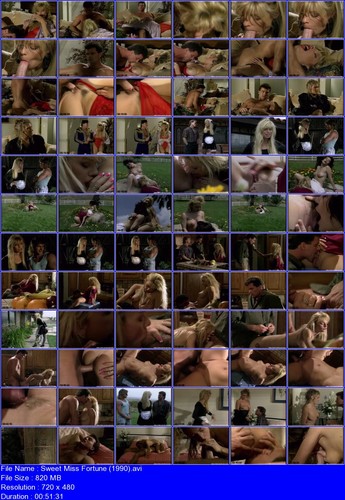